BDNF:  A Key Component of a Healthy Brain 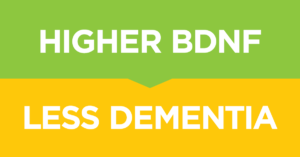 Brain-derived neurotrophic factor, or BDNF, is the most common neurotrophin in humans.  Neurotrophins are proteins necessary to make brain cells work properly.   BDNF plays an important role in promoting the survival of nerve cells by regulating their growth, maturation and repair.  BDNF also makes synaptic connections within the central nervous system (CNS) and peripheral nervous system (PNS), playing a major role in promoting plasticity, the “hard-wiring” of stimuli into the brain’s structure.  Synaptic plasticity is a process by which the connections between nerve cells get stronger.  As these connections are maintained, they contribute to learning, a process called long-term potentiation (LTP). 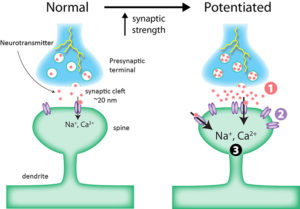 Where is it made?

BDNF is made in the endoplasmic reticulum (ER), a part of our cells responsible for making proteins and lipids.  The majority is released from the brain, however it has been found in other tissues throughout the body such as the gut and the kidneys. 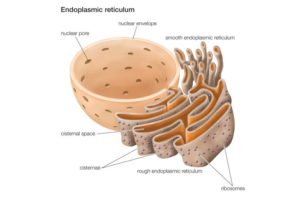 What conditions are involved?

BDNF is important for learning and memory.  It can be effective in Alzheimer’s disease, depression, and other neurological diseases.  Studies have shown that levels of BDNF in the blood and brain are lower in patients with Alzheimer’s disease (AD)  in comparison to healthy individuals, suggesting that diminished levels may play a role in the disease process.  Higher levels of BDNF have been shown to slow down cognitive decline in the elderly population.  BDNF has been shown to increase both short- and long-term memory.  BDNF also plays a role in controlling inflammatory conditions, such as Type 2 Diabetes (T2D).  Studies have shown that BDNF significantly reduced blood glucose, decreased weight gain and food intake, and enhanced glucose metabolism when combined with antidiabetic drugs.  Although BDNF has shown to be beneficial in the prevention and management of various diseases, it is important to regard its use as supportive care, rather than a sole form of treatment.

How Do I Measure My BDNF Level?

Blood and saliva testing for BDNF is being used for research but is not yet available for everyday use.  Studies have looked at BDNF levels as an accurate way to measure traumatic brain injury (TBI), with BDNF levels falling after a TBI.

How Can I Increase BDNF?

Medications that have been shown to increase BDNF

Nootropics, or smart drugs, support cognitive function.  Many supplements have been shown to improve some aspects of brain function and cognition.  Please visit my blog for other articles on these valuable natural medicines.  Here are some which I use and recommend as having few if any side-effects.

What brands/forms of these supplements should I take?

I have provided a link to my online dispensary, which offers only professional-quality brands.  For WCFC, I recommend either Advanced Neuro Plus or Brain Vitale, combination nootropic products.  Make sure you take a high enough dose to deliver 200 mg of WCFC.

What else can I do to improve mental function?

As a trained Bredesen Protocol practitioner, I have been helping my patients prevent and reverse cognitive decline.  If you or a family member is concerned about sudden or progressive memory loss or processing ability, consider contacting my office for a consultation.